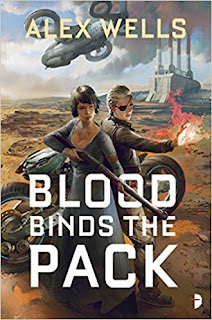 I recently finished two sci-fi westerns by Alex Wells in which a union made an appearance. Hunger Makes the Wolf (2017) and Blood Binds the Pack (2018) follow the adventures of Hob Ravani as she leads a group of outlaws (the Ghost Wolves) on the bone-dry corporate planet of Tenegewa.

Tenegewa is dominated by the TransRift Corporation (which controls interstellar travel). TransRift has established a number of corporate towns (both mining and farming), which harken back to Appalachia in the 1930s (or 1970s!).

The heavy-handed tactics of TransRift are sometimes collectively resisted by the miners, who might call a day of rest and thereby reduce production. Over the course of the two novels, the situation faced by the miners deteriorates and they become more militant.

Ravani’s bandits eventually work in collaboration with the miners to undermine TransRift and give the distant government a pretext for more involvement (there is a power struggle between the government and TransRift over space-travel technology).

Overall, the books do a decent job of portraying the process of organizing workers. I found the books a touch long but hung on to the end.