Athabasca U survey reveals lack of trust in senior executive 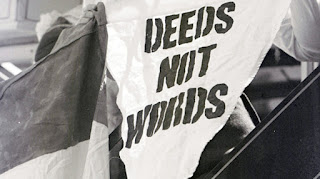 Earlier this spring, Athabasca University undertook an external survey of staff engagement. The results are below the industry average and entail significant skepticism about the trustworthiness of AU’s senior leadership. For those who didn’t attend the presentations in mid-July and don’t have an hour to spend watching the video, here is a quick summary.

The consultant making the presentation took pains to note that engagement differs from satisfaction. Engagement is intended to heightened workers’ emotional and intellectual connection with the employer in order to increase employees’ discretionary effort. I’m not sure openly seeking to manipulate workers’ behaviour is super motivating, but, hey, at least the consultant was honest about the intent.

I suspect there is likely a systematic difference between those who filled out the survey and those who didn’t. And it probably centres on the respondents’ level of engagement. Surely such a difference that would be surely germane to the results of… an engagement survey. I suspect that a complete picture would add to the negative side of the ledger.

Overall, AU scored consistently below industry benchmarks on all dimensions of engagement. The bottom half of the figure below shows significant problems with communication, student focus, teamwork, and senior leadership. (Orange is bad throughout the figures.) 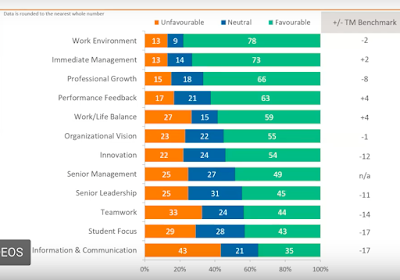 The consultant largely dismissed these negative scores as common issues (despite the deviation from the benchmarks) and not particularly relevant to driving engagement (key dimensions being professional growth, organizational vision and senior leadership). Setting aside the issue of whether engagement is a valid concept, from a common-sense perspective, these scores are bad news.

Questions specific to AU’s I-CARE values were asked. (Apologies for the murkiness of the screen grab.) The most interesting finding is that only 46% of respondents believe that AU executive behave in way that is consistent with the values that the executive created as part of its Imagine-ary strategic plan. 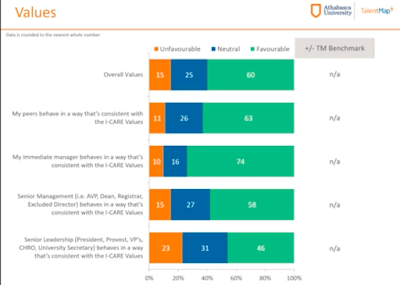 When asked about senior leadership (basically the university’s executive), only 39% of respondents believe that senior leaders act consistently (i.e., do as they say). This is 13% below the benchmark. And only 43% of staff have trust and confidence in the exec’s ability to achieve the goals of Athabasca University, 15% below benchmark. 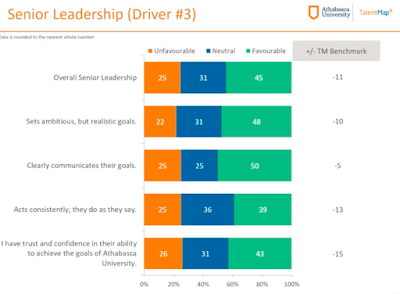 Only half of respondents agreed the executive clearly communicates their goals, 5% below benchmark. Only 48% believed executive set ambitious but realistic goals, 10% below benchmark. The open-ended comments provided by respondents will not be shared with staff (even though historically such comments were shared). The consultant did note that a key demand expressed in the comments was for communication that was not so highly torqued by spin.

An example of this is the president’s bi-weekly email (“Neil’s Notes”), which is clichéd, saccharine, studiously avoids commenting on contentious (i.e., internally important) issues at the university, and sometimes borders on incomprehensible. After a year of trying to see value in it, Neil's Notes now goes directly to my junk folder.

Despite the endless communication from the university, there remain communication problems. For example, only 43% of respondents understand what needs to be done for AU to succeed in the long term. This is 10% below benchmark.

There are apparently significant differences between groups at AU but these differences will also not be provided to all staff. The results for the IT unit were presented to IT staff last Wednesday and were notably worse than the institutional average. This is surprising given that 20% of the unit comprises new hires who should not be jaded so soon.

The consultant confirmed that the recent and unpleasant round of faculty collective bargaining was on the minds of some respondents and likely contributed to the poor results.

Only the president and HR director get to see the written comments. The irony of telling staff to trust the senior exec to correctly interpret and act on comments collected on a survey where staff indicated they demonstrably don't trust the senior exec has not been lost on the staff I’ve spoken to about this. The father-knows-best vibe is playing poorly among workers, who are used to drawing their own conclusions about what information means.

This survey does help quantify the morale problem that is clearly evident to anyone who works inside AU. Given the effort made to improve AU’s culture by the current executive (which at this point seem to have degenerated to sloganeering about some imaginary “oneAU” and calling staff “AU team members”), this survey demonstrates the executive’s approach is not effective.

A question that was not asked in the presentations was why the Board re-appointed the president before the Board received these results (or, indeed, even had the survey conducted)? When this was asked last fall, the answer was the president’s review had to be done quickly to meet government mandate for a new contract. Whether or not it is true, that explanation is being greeted with eye rolls and disbelief. This level of cynicism is the organizational equivalent of cancer.

Perhaps a rethink by the executive of their approach is in order over the summer? With all three unions likely in collective bargaining in the next 18 months and the slow drain of jobs from the Athabasca area continuing, morale and organizational effectiveness are unlikely to improve with a status quo approach.

Thanks for this, Bob. To respond to this passage:

"Only the president and HR director get to see the written comments. The irony of telling staff to trust the senior exec to correctly interpret and act on comments collected on a survey where staff indicated they demonstrably don't trust the senior exec has not been lost on the staff I’ve spoken to about this."

WOW. In that so many people put so much thought into those answers, only to be seen by a few higher-ups, is shameful. I think this issue should be brought up by EVERYBODY in Neil's next box-checking public forum. That survey, in many ways, was his performance review by the AU community. We should all be able to see the results in their entirety and discuss them openly. I suspect that the reason the answers have not been readily published is because they hit their mark so well. Perhaps those answers were what Neil was alluding to when he came down hard on bullying at AU during his last round of public discussions —— his feelings were hurt. I hope my comments here will help to encourage the AU community to challenge Neil on why we can't see these results.