Should I take a job at Athabasca University?

Every year, I receive phone calls from a couple of dozen candidates considering taking a job at Athabasca University (AU). Usually, these folks find me through this blog or word of mouth.

So, as the academic job-hunting season begins, I thought I’d take the opportunity to write down the pros and cons of taking a job at AU. These comments are mostly directed at folks considering a professorial job.

PROS
Working from home: Pre-pandemic, the vast majority of academic staff worked from home offices). Although the majority of staff live in Alberta, recently staff have been permitted to work anywhere in Canada. This means you can stay in your home community.

At the time of writing, the university’s Board is engaged in an ill-chosen bun fight with the provincial government over the ongoing loss of jobs in the town of Athabasca (where the university’s headquarters is located). The government wanted, at one point, 65% of staff to work from there (despite there being inadequate housing stocks and office space). It is unclear how this dispute is going to play out or how it will affect where academic staff can live. You’ll definitely want to ask about this in your interview.

Setting your own schedule: For the most part, instruction at AU is asynchronous and text mediated. Since you don’t have to appear at a fixed time each week to lecture, you can largely set your own schedule. Start early or late. Work in the middle of the night. Take your kids to school or you mom to the doctor. As long as you get your work done and show up for the small number of fixed meetings, you basically can organize your life however you want.

Good benefits and pension plans: The benefits plan for faculty is pretty good, particularly in terms of vision, eyecare, and drug coverage (although costs are reimbursed, not pre-paid).

The pension plan is also pretty good, although you’ll pay about 11% of your salary into the plan. You can collect a full pension when (1) you are at least 55, and (2) your age and years of services equal 80. A full pension is 70% of your average salary during your five best consecutive years of employment. You can take a reduced pension any time after 55 if you have not yet met the 80 factor.

Faculty are typically hired with a four-year probationary appointment. After a successful review, you receive tenure. You can choose when to apply for promotion in rank. If you apply for and receive promotion before your tenure review, then you also automatically get tenure. Promotion is also rarely denied although the process is more rigorous than just tenure.

Financial stability: AU is financially stable (despite a history of the administration crying insolvency). In 2021/22, AU posted a surplus of $10.4m on expenses of $150.6m. This was the sixth straight surplus and ninth surplus in 10 years. AU has an accrued surplus (i.e., cash in the bank) of $46.9m.

Government funding of AU has been stable over the past few years. Only about 35% of institutional revenue comes from grants (the largest chunk is tuition based). Enrollments have been falling (about 9% per year for last two years) but the nature of AU’s business model is that the costs of revenue losses due to declining enrollment are borne mostly by the tutor pool (i.e., permanent, part-time academics with variable teaching loads).

Poor wages: Overall, wages are low and have fallen significantly behind inflation. The table below compares the compounded cost-of-living adjustments (COLA) to faculty wages and Alberta inflation from 2013 to 2022. Basically, the purchasing power of staff wages at AU has dropped by ~20% over 10 years. 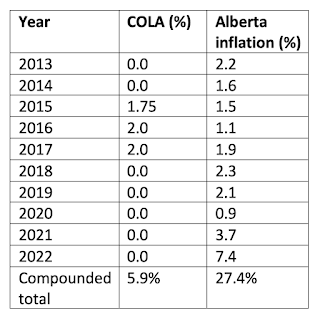 Going forward, the COLA for adjustment for 2023 will total between 2.75% and 3.25%. Unfortunately, inflation is presently running about 8%, so expect another big loss in purchasing power.

Compounding the erosion of purchasing power is that starting salaries in nominal dollars are roughly the same as they were in 2007. There is also evidence of a gender wage gap (but zero interest by the institution in addressing it). While the institution will often say that salaries are negotiable, in practice that is not the case.

Poor Treatment and Low Morale: The treatment of staff by the university is, in a word, awful. I’ve been on the union grievance committee for a decade. While I can’t tell you everything I’ve seen, here are a few illustrative examples of how individual staff have been treated:
Over the past five years, the employer has twice driven collective bargaining to impasse and the verge of a strike by demanding huge concessions. In between those rounds of bargaining, the employer also tried union busting with an effort to carve two-thirds of the union’s members out of the bargaining unit (and thus out of the pension plan).

The most recent survey of staff (Spring 2022) by the faculty association finds only 20% of staff trust the senior executive and only 39% agree with the statement that “my morale is high.” The employer no longer does staff surveys because the results were so consistently bad.

Workloads have also gone up, particularly for administrative staff, due to COVID. More subjectively, I’m seeing a widespread withdrawal of citizenship behaviours and effort by my colleagues. Essentially, they are realizing AU doesn’t care for them and are (understandably) reciprocating in kind. The upside is the union is tenacious, fights hard, and has strong member support.

Isolation: Working from home with essentially no in-person contact with co-workers or students is extremely isolating and may not be for everyone. Further, AU has no functional orientation process for new staff and most of the institution’s processes do not operate in the way that the various policies and procedures (often decades old) say that they do.

COVID has limited the opportunity for staff to meet socially (which is how we used to cope with the isolation and get our questions answered). In theory, more experienced colleagues in your area should provide you with an orientation and social introductions. In practice, the experiences of new hires is very uneven.

So, with those thoughts and the poor state of the academic job market in mind, one approach to a job offer might be:
-- Bob Barnetson
Posted by Bob Barnetson at 1:59 PM

Great article Bob and all true. You left out high turnover.


To me, that is a big red flag to anyone thinking of working there.

Great article- AU is by far the most disrespectful and badly managed workplace I have worked at.I wish I could post my name, but I dare not.