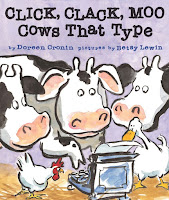 This week’s instalment of Labour & Pop Culture looks at the children’s book Click, Clack, Moo: Cows That Type by Doreen Cronin. The crux of this fable (which you can listen to below) is that the cows find a typewriter and ask Farmer Brown for electric blankets to warm up the barn.

Framer Brown refuses and the cows (and hens) withhold their labour. Eventually the two sides come to an agreement: the animals get electric blankets and they give up the typewriter. But then the ducks start making demands.

I love Click, Clack, Moo because it highlights (in a very inoffensive way) a number of lessons about labour relations. In no particular order:

Class conflict: Farmer Brown depends on the cows and hens to make a living. When they want better working and living conditions, he balks (presumably because of the cost). Herein lies the crux of class relations: conflict over the distribution of profits arising from the labour of workers.

Collective power: Once the workers (cows and hens) have some way to articulate their class interests and express them to the boss (Farmer Brown), they suddenly have power. Farmer Brown eventually caves.

Interestingly, the concession he demands is not higher production, but rather that the workers agree to not strike again (by giving up their type writer). What this tells us is that boss’s power depends (in part) on the acquiescence of the workers and he will accommodate worker’s monetary demands as long as he can maintain control over the workplace.

Gender: Note how the workers (hens and cows) are all female while the boss (Farmer Brown) is a man? Note how pissed off and dismissive Farmer Brown gets when the womenfolk get uppity? I wonder how he would deal with a bunch of angry bulls and roosters (who are far more physically threatening). I suspect he’d shoot them.

The Farmer Wins: In the end, the workers go back to their jobs and order (i.e., the employer extracting surplus value from workers) is returned to the barnyard. It is interesting to speculate what would have happened if Farmer Brown dug in his heels and, say, cut off the feed to the animals or turned them out of the barnyard.

Cat’s Out of the Bag: Once the ducks see how successful the hens and cows were, they too start making demands using the typewriter. This speaks to both the universal and enduring nature of class conflict in capitalist societies.

This book also allows us to reframe some of the angst in Alberta’s agricultural community about the possibility that unionized farm workers will (one day) be able to strike. In this book, the workers’ strike for decent living and working conditions looks pretty reasonable (Farmer Brown’s refusal less so).

So why all the angst when it comes to other humans requesting the same thing? The answer is that it is about power and privilege. Farmers have long been the undisputed masters of their domain (acknowledging the broader economics dynamics of commodity producers in producers have little bargaining power).

Losing that control on the farm feels like an attack on their authority. Further, giving workers the right to strike compels some farmers to confront the fact that their operations are only economically viable if they can externalize costs onto workers in the form of low wages and poor working conditions.