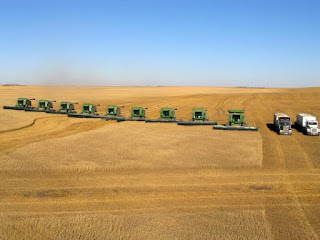 In late 2015, the government passed Bill 6, which extended basic OHS rights and WCB coverage to farm workers. The full implementation of basic employment rights was deferred pending consultation with affected groups. Five committees have been meeting since early summer to hash through how to apply Alberta’s employment laws to paid farm worker.

The Alberta Agriculture Farm and Ranch Safety Coalition (AgCoalition) represents most (29) of Alberta’s producers groups and its representatives have 23 of 72 seats on the working groups. In late September, the AgCoalition provided an update on progress at the Labour Relations table, which is discussing how the Labour Relations Code should apply to farms and ranches.

Not surprisingly, AgCoalition reps oppose any strikes (and, one presumes, lockouts) in agriculture. The thinking appears to be that the time pressures associated with seeding/harvesting crops and taking care of animals mean that a strike would be profoundly harmful to employers and to food/public safety (I’m not sure this latter point is particularly true if essential services legislation is place…).

The most fascinating thing is that there was agreement to add language to the Public Emergency Tribunal (PET) provisions of the Labour Relations Code that would allow the government to impose binding arbitration (in the form of a PET) whenever a strike or lockout results in imminent and irreversible danger to crops and livestock.

On the surface, it seems crazy that the various labour representatives would have agreed to this. Imminent and irreversible harm to crops and livestock provide any union with significant bargaining leverage (indeed, it may be the only time the union has much leverage). What could explain the labour-side reps supporting the idea that strikes should be disallowed if they exert economic pressure on the employer (which is the purpose of a strike)?

Maybe it was true concern for the welfare of animals or food safety. I suspect though, the real calculus was that unionized farm workers will do better at arbitration than using strike/lockout to break a bargaining impasse.

Any unionized farm workers looking for a first contract are likely to face rabid employer resistance. Going to arbitration will get the union and workers a basic agreement no matter what. This will include provisions for union security and access and basic substantive provisions (e.g., language on wages and benefits) as well as procedural provisions (e.g., grievance and bargaining procedures). And (assuming the union times it right), a PET will get the union these provisions without having to go through a nasty strike/lockout with the attendant risk of the employer trying to convince the workers to ditch their union.

In this way, the labour reps have achieved a form of first-contract arbitration, an issue upon which there was no consensus when it was brought up separately. For their part, employers have also minimized the downside risk of a strike. It will be interesting to see whether the government accepts these consensus recommendations.