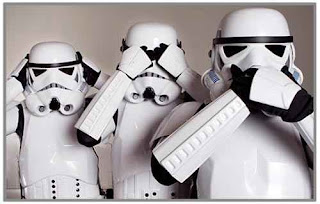 I’ve been reading about employee reactions to deteriorating working conditions as a part of an ongoing research project about how fear affects workers' willingness to report health and safety problems. Back in 1970, Albert Hirshman posited that members of organizations have two basic responses when things start to go badly: exit or voice. Exit is self explanatory; voice is action workers take with an eye to improving conditions (e.g., speaking out, whistleblowing).

Over time, this typology has been refined to include loyalty and neglect. Loyalty (sometimes called patience) happens when workers choose to ride out a bad patch (often in silence, but not always). Neglect is essentially workers giving up and can result in non-compliance, obstruction, and disengagement.

The exist-voice-loyalty-neglect (EVLN) model has been applied to any different situations (e.g., consumer behaviour, romantic relationships, employee turnover) and often yields interesting insights and explanations. One aspect of a good social science theory is that it has high face validity: basically it sounds plausible to an informed ear.

In reading EVLN, I was struck by how much of my own experiences I can see in this model. My first reaction to organizational troubles at Athabasca University (back in 2004-2006) was loyalty: basically I assumed that those in charge knew what they were doing and the few problems that I could see were aberrations that would be corrected or just accepted.

By 2009, it was becoming increasingly obvious to me that there were deeper issues (specifically incompetent leadership and looming financial woes) and I chose various forms of voice to try and resolve them. As it became apparent that internal governance processes were ignored (about 2011?), my use of voice escalated and turned to using external venues to generate additional pressure.

As things worsened (e.g., layoffs, constant threat of closure, non-stop violations of the collective agreement), I then turned to neglect (around 2013) where my strategy was to obstruct the employer until circumstances changed. An alternative would have been exit but, as a middle-aged guy 10+ years into a pension plan, exit wasn’t a good option.

While things are (at least superficially) better (because the employer is keeping the club behind its back instead of waving it in our face), objectively, not much has changed. A difference for me is that, absent a crisis, I’m now mostly disengaged. I still do my job but I try to limit my interactions with my employer as much as possible (increasingly I'm spending my time on my research and engaging with community partners).

For example, I don't attend optional meetings and I don't read much of the institutional email. When I have to attend a meeting, I usually do it by teleconference because that is way less emotionally demanding. Basically, I am counting down the days to retirement (just under 2900 calendar days, if you were interested) and using neglect to bridge to exit.

My colleagues have exhibited different pathways through the last 10 years. This reflects that workers select among the EVLN options based upon their level of satisfaction with, investment in, and alternatives to their current job. I see a lot of neglect these days—mostly in the form of silence—as well as moments of voice (often defensive and occurring when something threatens a core term or condition of employment—but not always).

The EVLN model is incomplete. There is one more option that disgruntled employees can choose - sabotage.