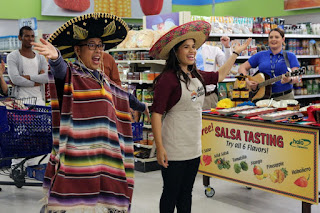 This week’s installment of Labour & Pop Culture is not a song. Instead, I’m going to plump for the sit-com “Superstore” that premiers its second season on Thursday, September 22 on NBC.

Superstore follows the adventures of workers in Cloud 9, a big box store where employees have to say "Have a heavenly day" to customers but otherwise can't discuss religion in the workplace.

There have been lots of shows set in workplaces (e.g., The Office, WKRP). What sets Superstore apart is its very clear commentary on the precarious and crappy employment conditions that its characters face and how they cope with them.

The first season (available on iTunes) starts out a bit uneven, with newcomer Jonah trying to fit in with various veteran workers. The sight gags in the first few episodes are funny. As the characters start to get established, attention shifts to some fairly typical corporate HR practices (e.g., corporate magazine profiles, racist job assignments, internal sales competitions, secret shoppers, anti-union animus). More interesting is how these practices lead to disengagement, cynicism and (strangely) Stockholm-syndrome behaviours.

The season finale (episode 11—short first season) sees the workers accidentally trigger corporate panic over the possibility of a union. The real issue is the workers want maternity leave for one of their coworkers who is otherwise planning on giving birth in the store because she needs the shift. The resulting union avoidance techniques actually catalyzes the workers to strike (and one scab seizes the opportunity to curry favour and advance her career).

Overall, this is pretty sharp (and socially critical) writing for network television and the second season appears to pick up with a strike.