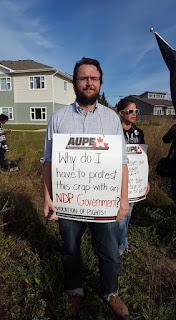 This week, workers represented by the Alberta Union of Provincial Employees (AUPE) at the Points West Living (PWL) senior centre in Cold Lake were set to strike. The employer had also served lockout notice.

PWL is one of the most profitable and fastest growing seniors care providers in Alberta. PWL receives public funding to provide seniors’ care. Worker pay is poor so turnover is high. AUPE has a website with more info about PWL.

Bad working conditions are the (intended) outcome of Alberta’s private-care system, set up by the former Conservative government. As former AUPE organizer Trevor Zimmerman explains it:

…the PCs created a funding system that incentivizes employers to reduce wages by not tying adequate strings to funding handed over for care. They do have to hire staff, but are not required to pay them with 100% of the funds given. They can use surplus funds generated by underpaying staff for fancy renovations, executive bonuses, or pure profit. This means most private care workers - especially the non-union ones - are getting screwed by this system. (Facebook post, reproduced with permission).

AUPE has a long-running campaign to organize workers in these facilities and improve wages and working conditions such that workers in private-sector operations are treated the same as workers in the public sector.

As the work stoppage approached, the government quietly appointed a disputes inquiry board (DIB).  A DIB is a process whereby pending work stoppages are placed in abeyance for a period of time and a mediator is appointed. If there is no settlement, there is a tedious process of recommendations and votes before a strike or lockout can commence. This DIB was requested by the employer

Basically a DIB is a delaying tactic—it puts off a work stoppage. Delay in a work stoppage typically benefits the employer more than the workers. It allows the employer additional time to procure scab labour, stockpile materials, target union supporters, and take other steps that minimize the effectiveness of the strike.

As Zimmerman points out, the Tories used to dress up a DIB by wringing their hands about “patient safety” and other bogey-men. This is obvious hokum. Strikes are not sudden events and employers have lots of time to prepare. PWL has a security firm at the ready and scabs being trained in Vegreville, so they are ready for a strike.

Indeed, if there was a serious safety threat, the government could use its powers under the Labour Relations Code to send the matter binding in arbitration (called a Public Emergency Tribunal). Interestingly, the NDs made no public announcement whatsoever about the DIB.

Not surprisingly, AUPE was pissed off:

“The NDP government is allowing the employer to prepare scab labour, private security and put other provisions in place enabling the company to avoid dealing with this situation directly,” said AUPE vice-president Mike Dempsey. “The province has rescued the employer and left residents and the workers who care for them in limbo.”

There are also many ND activists in the labour movement who are quite upset at what they view as a betrayal. Not everyone is jumping on the government. For example, the Alberta Federation of Labour (AFL) has been conspicuously quiet (at least in public) on the issue (AUPE is not part of the AFL).

The real question here is why did the government intervene, instead of letting the strike/lock out occur? Strike/lockout is how collective bargaining impasse is broken and restricting the right to strike (through senseless delay) runs contrary to the spirit (although probably not the strict interpretation) of the Supreme Court’s decision in Saskatchewan Federation of Labour v Saskatchewan.

The best theory I have heard is that the government has chosen one day of bad press (wherein some unionists complain about being betrayed in a complicated way and ambiguous circumstances) over a long-running story about seniors being held hostage by a strike (with the opposition pounding the NDs about doing nothing about it because they are all putatively buddy-buddy with labour).

I’ve heard other, more entertaining explanations, including that this is some kind of “false flag” event (wherein AUPE looks tough on PWL without having to strike and the NDs look tough on labour without having to really do anything). That sounds pretty improbable to me, but who knows?

The real question will be how this shakes out during the DIB process. If the parties don’t resolve the impasse, then the government gets the nasty strike headlines during the fall sitting pus it just pissed off a bunch of supporters. That said, whether either of those things really matters by the time the next election rolls around is a good question.

And that may be the real political calculus. It is not like labour has anywhere to go for the next election (except staying home) and the public’s memory about a strike is likely to be short. So avoiding the work stoppage on the chance that the DIB will resolve the matter (and, if not, at least it gives the government a “well, we tried” sound bite) may be the best play available to them.

Posted by Bob Barnetson at 3:04 PM

Here is some coverage of the decision: