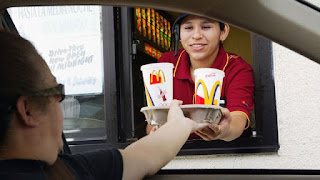 Last week, Public Interest Alberta and the Alberta College of Social Workers released some interesting wage data for Alberta. Almost 355,000 Alberta workers (18.6% of employed Albertans) earn $15 per hour or less. Over 400,000 earn $16 per hour or less.

Not surprisingly, 60% of low-wage Alberta workers are women. PIA and the College conclude that Alberta’s promise to increase the minimum age to $15 per hour by 2018 will make a significant difference to many Albertans and reduce gender inequality. (That said, some groups note that $15 per hour is still below a living wage in 2016, let alone in 2018.)

Interestingly, more than 75% of low-wage workers in Alberta are over age 20, which undercuts the business lobby’s critique that low wages aren’t an issue because they mostly affect teenagers. According to PIA executive director Joel French:


The image of a teenager living in their parents’ basement and working just to earn extra spending money is not the reality for most low-wage workers. Most of these workers are in their prime earning years and are at the stage where they are planning for or are already supporting families.

One way to view PIA’s announcement is as an indication that there is some (not much, but some) unease among Alberta progressives about whether the NDs’ commitment to $15 an hour will stick if the economy remains stagnant. While there is little evidence that minimum wage increases negatively affect employment levels, employer groups have been messaging hard against wage increases.

The ongoing support of a $15 minimum wage from progressive groups both provides political cover for the NDs (“the PEOPLE are demanding it!”) and reminds MLAs about the social equity expectations of key supporters ("the people ARE demanding it!"). And French's repudiation of the stereotype of low wage workers as mostly teens appears to be an intentional attack on the employer lobby's messaging.